MS Swim Results The middle school swimming and diving team suffered a loss to Gibraltar Shumate in their first dual meet of the season yesterday by as score of 172-135.  Coach Mumau added that the meet was a lot closer than the score indicates. The boys portion of the meet featured top finishes by Gage

We are experiencing a glitch in our  scheduling program.  You can find accurate schedules by sport under the participation tab.

Welcome to the new front page of Woodhaven Warrior Athletics.  Find forms, information, schedules and scores here.  Subscribe and follow us online for the latest news and notes from your favorite team.  Go Warriors!! 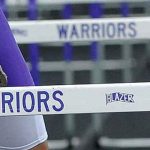 With the new website, we now have a portal to promote our sports like never before.  If you would like to get involved with reporting scores, writing articles or even taking pictures or video … Contact the Athletic Department to see what you can do to help and make woodhavenathletics.com the best of the best on

No Events This Week

Events are added by athletic staff.
View All Events